The BBVA Foundation Frontiers of Knowledge Awards recognize and reward world-class research and artistic creation, prizing contributions of singular impact for their originality and significance.

The BBVA Foundation Frontiers of Knowledge Awards recognize and encourage world-class research and artistic creation, prizing contributions of broad impact for their originality and significance. The name of the scheme denotes both research work that successfully enlarges the scope of our current knowledge – pushing forward the frontiers of the known world – and the meeting and overlap of different disciplinary areas.

The Frontiers Awards distinguish fundamental disciplinary or interdisciplinary advances in basic, natural, and social sciences and technology, alongside creative activity of excellence in the music and opera of our time. Honors are also reserved for two vital areas of environmental research: climate change and ecology and conservation biology. This year the list is joined by the new category of Humanities and Social Sciences, alternating annually between these two domains, with the award in the current edition devoted to the Humanities.

The goal of the Frontiers Awards can be summed up in the following principles. Firstly, to recognize the importance of basic knowledge. However valuable the other forms of applied research privileged by science policy in these past decades, basic knowledge remains the principal driver of scientific change and, indirectly, of our material progress, wellbeing, and cultural development. Secondly, to recognize the increasingly interdisciplinary nature of knowledge in the closing decades of the last century and our present days. Hence the decision to group awards so as to reflect the interaction and overlap of disciplines (Physics, Chemistry, Mathematics; Biology and Medicine; Economics, Finance and Management), while retaining the option to distinguish an outstanding advance in one discipline alone. The awards, organized annually, also acknowledge the fact that many seminal contributions to our current stock of knowledge are the result of collaborative working between large research teams. This is why, unlike other prizes reserved for one person alone or perhaps three at most, they may be shared by any number of any size teams, provided the achievement being recognized is the result of collaborative or parallel working. This year, as stated, the humanities and social sciences take their place beside the basic and natural sciences and ICT, and the category distinguishing excellence in music, a supremely innovative art form that does much to shape the culture and sensibility of each era.

The BBVA Foundation Frontiers of Knowledge Awards are decided by committees made up of internationally reputed experts in their respective fields, who deliberate in complete independence relying solely on the standards and metrics of excellence proper to the subject area. Their members are appointed by the BBVA Foundation in consultation with the Spanish National Research Council (CSIC), the country’s premier public research organization, which also proposes the committee chair. The partnership between CSIC and the BBVA Foundation endorses the objectivity, independence and standards of excellence informing each stage of the selection process. It also rests on a shared conviction of the fundamental role played by world-class scientific research and artistic creation in the opening decades of the 21st century as a force for the ongoing advancement of society.

The Frontiers of Knowledge artwork synthesizes the eight categories addressed and, at the same time, conveys the ambition of all disciplines advancing together towards new terrains of knowledge. It is based around a spiral, chosen for its symbolism in numerous cultures as an image of life, and its ability to represent both continuity and growth in a limited space. The spiral expands endlessly outward from its point of origin. The three spirals in the piece are segmented into seven points, plus an eighth point which marks their common origin. By this means the artist brings the seven scientific disciplines harmoniously into play, to the rhythm of the eighth: contemporary music. 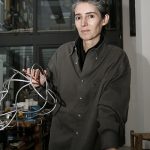 Blanca Muñoz obtained a B.A. in Fine Arts from the Universidad Complutense de Madrid. She has held scholarships at Calcografia Nazionale (1989), awarded by the Italian Government, at the Spanish Royal Academy in Rome (1990), and in Mexico City (1992), awarded by the Mexican Department of Foreign Affairs. Recipient of a 2014 Leonardo Grant for Researchers and Cultural Creators from the BBVA Foundation, her many distinctions as a sculptor and printmaker include the 1999 National Print Prize.

With the collaboration of